“30 years of Cultural Routes of the Council of Europe from 27th to 29th September 2017: Building dialogue and sustainable development through European values and heritage”

The 7th Advisory Forum of Cultural Routes of the Council of Europe was hosted in Lucca this year, in cooperation with the Italian Ministry of Cultural Heritage and Activities and Tourism, the Tuscany Region, the Province and the Municipality of Lucca and the European Institute of Cultural Routes. The main focus of the event was the celebration of the 30th Anniversary of the Cultural Routes of the Council of Europe Programme. It was honored with an official Opening at the Palazzo Ducale of Lucca, followed by an Awards Ceremony and Concert at the Teatro del Giglio of Lucca. During the Awards Ceremony, each Cultural Route was awarded a 30 years Anniversary Certificate. 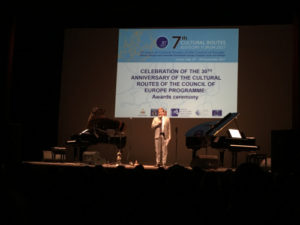 In the following days three main themes were explored:

Around 400 guests from more than 30 Council of Europe countries and beyond payed tribute to the Cultural Routes Programme during this special occasion, highlighting its past, present and future contributions to the promotion of the values of the Council of Europe in the field of human rights, cultural heritage and intercultural dialogue.

Here you can find further information on the speeches and discussed topics.

A supplementary unique experience was the Cultural Routes Trade fair that took place during the Forum. It was an occasion connecting Tourism Operators and Organisations with the Cultural Routes and their Representatives thus initiating potential future cooperations. 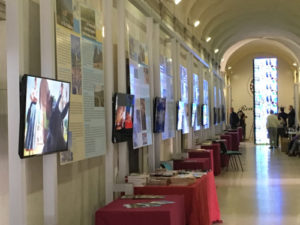 Next year, the Cultural Routes Advisory Forum will be held in Görlitz, Germany.